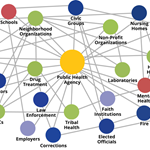 Prof Paul Johnstone: Reducing Health Inequalities - a decade of learning and preparing for a decade of hope

The last decade has seen long-term increases of life expectancy stalling and for some areas and communities a deterioration. This is the first time in 100 years that this has happened.

This concerning situation echoes both my own recent research and the recent tenth anniversary report from Professor Sir Michael Marmot.

Sir Michael highlights a difficult decade with the impact of austerity, rising levels of poverty, foodbanks and local authority cuts. Yet a desire to reduce health inequalities has widespread support across governments and locally. There are policies and roles for tackling inequalities in the NHS, local government and my own organisation, Public Health England.

It has also been a decade of learning and, arguably because it has been a difficult decade, we have learnt more.

Some of what I have learnt informs my belief there are some real opportunities for policy and supporting place-based approaches to tackling inequalities which will make a positive difference in coming years.

As a time of significant change, I echo the Marmot view that policies matter and places matter. A Government wish to ‘level up’, especially in deprived areas in the north, provides a chance to build on this.

His report recommends a new cross government strategy chaired by the Prime Minister and this recognises that tax, fiscal and other national policies on benefits, schools and housing matter. Based in the north of England as I am, my focus is on local and regional action to support place-based approaches, using what we have learnt and delivered to support this in PHE.

From a very personal perspective, when I was a Director of Public Health in Teesside from 2000, this was at the time when we had the first national health inequalities strategy. A range of NHS driven policies such as National Service Frameworks for Coronary Heart Disease (CHD) and cancer, Health Improvement Plans (HIPs) and Health Action Zones (HAZs), had new programmes on for example tobacco harm, supporting primary care and access to secondary care. The NHS prioritised poorer areas and a range of new programmes targeted poor health and poor service access. In Teesside and other areas of the north we saw a narrowing of CHD death rates over the decade to 2010 and then a divergence.

The systematic approach engaged all clinicians from every part of the NHS. The HAZ brought together the local councils in Teesside on a public health agenda for the first time since the 1970s.

However, we could have done a lot more on the causes of the causes - the wider determinants. Without this, we were swimming against the tide. It was clear many communities felt left behind or felt they were on the receiving end of top down regeneration policies with which they hadn’t really engaged. They remained disempowered. All of these factors reduced our chances to achieve desired changes, whether in good quality jobs and housing, better education or reduced air pollution and the influence they have on mental health and lifestyle choices such as smoking.

The 2013 NHS reforms saw public health responsibility return to local government. This opened up fresh approaches to improving health, as public health experts started working alongside council directors and policy makers. Many in local government had already been engaging on this agenda, working as council officers and elected members to make changes to positively influence health outcomes. The 2013 reforms provided a formal change, offering the chance to influence and inform services such as housing, transport, environment and schools.

In the north of England, we commissioned Margaret Whitehead to produce the Due North Report which has since shaped and supported public health teams across the north and beyond.

Devolving power or other devolution was a key recommendation of Due North. We’ve seen nascent forms of devolution, for example in Greater Manchester with their Health and Social Care Partnership, and other forms of devolution in Yorkshire and the North East / North Tyne. This is still a journey and PHE is actively supporting six elected mayors across the country in a programme of work led by our health improvement team. These areas have greater control over transport, environment, air quality, housing and public health practitioners are at the heart of things, advising and supporting.

The original Marmot report and analysis of healthy life expectancy in 2010 brought about a mindset change in approach. The differences are stark, with notable 20 year gaps in unhealthy years in the poorest tenth areas and a recognition of the burden of ill health across society. These differences are not just between the north and south, but reflected in local communities too. We recognise that inequalities fall and impact differently on different population groups, and where resilience is low then obviously the impact is greater.

Allied with analysis PHE does, the inequalities agenda has moved away for being a social and moral one, to one about improving economies and productivity. The previous government made this connection in policy with the Industrial Strategy which set a Grand Challenge to reduce inequalities and the gap of life expectancy for every area by five years by 2035 through economic development.

In the future, continued working within local government offers significant opportunities to build on assets in the community, empowering and working alongside communities.

We have great examples of good practice, such as New Wortley in Leeds. There is an emerging body of evidence which PHE has published around communities work.

We have a chance to grasp the place-based ways of working which are a theme of government policy, and we have seen great examples of local political leadership and engagement involving community leadership and councillors coming from those communities. There is good evidence that local empowerment makes a difference, shown by research and details can be accessed via our communities website.

As we face the challenges of Brexit and COVID-19, as we factor in government commitments to prioritise levelling up, and see increased focus on towns, there is room for optimism.

Prof Paul Johnstone: Reducing Health Inequalities - a decade of learning and preparing for a decade of hope